If your pockets are feeling quite a bit lighter these days, you're not alone. 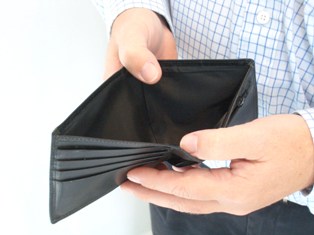 Recent data from the Federal Reserve illustrates just how powerful an impact the recession - and the supposed recovery - has had on the finances of American families.

Middle-class families have suffered the biggest financial blows because the majority of their wealth is tied up in their homes rather than in bonds and other investments. As our Atlanta bankruptcy lawyers reported last month, nearly half of homeowners in the Atlanta region owe more on their mortgages than their homes are worth.

Unfortunately, the situation doesn't seem to be getting better with time, as real estate values have continued their downward slide.

This April, the median household income was actually 5.9 percent lower than in June 2009, when the recession was said to have officially ended.

With less money to cover the mortgage, medical bills, and credit card payments, many families are sinking deeper into debt. Fortunately, Atlanta bankruptcy may offer a solution.

Bankruptcy was created to assist consumers in situations exactly like this one. For families that qualify, filing for Chapter 7 bankruptcy in Atlanta can discharge unsecured debts like credit card debt, eliminating the burden of overwhelming bills.

For others, Chapter 13 bankruptcy provides the ability to reorganize debt into manageable payments while protecting against foreclosure.

If you're drowning in debt, Atlanta bankruptcy can be the lifeboat you need to keep your finances - and your quality of life - afloat.

To find out if bankruptcy is right for your family's situation, call the DebtStoppers Bankruptcy Law Firm at 800-440-7235 to speak with an experienced Atlanta bankruptcy attorney. Contact us today for your free one-on-one debt analysis.

For Underwater Georgia Homeowners Who Are Delinquent, Atlanta Bankruptcy Provides Relief: May 24, 2012

As Economy Improves, Many Consumers Are Still Weighed Down by Debt in Atlanta: May 18, 2012