As many American families struggle to stay afloat in this tough economic environment, a new study found that credit card debt remains a leading cause of bankruptcy in Atlanta and elsewhere in the United States. 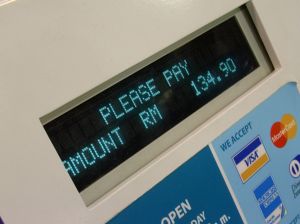 Our Atlanta bankruptcy attorneys highly recommend you seek the legal help of an experienced lawyer if you're experiencing financial troubles because of credit card debt. Credit card debt can burden many aspects of your life. Creditors can continually call and harass you in efforts to collect payments. Late fees and penalties can make it impossible to catch up. The stress can literally take years off your life. Consulting an experienced attorney can help you make a fresh financial start.

A separate study, conducted by Experian, found that the average consumer has racked up more than $4,000 in credit card debt. On a slightly positive note, that average illustrates a 4 percent decrease from last year. Whether the recession has led to increased savings or whether the reduction is attributable to credit card companies slashing credit lines is debatable.

The average amount of debt in our city is $4,960 per individual. Such debt levels consume a substantial portion of the average consumer's income. Credit experts say that a combination of economic desperation and needless spending caused the city's increasing credit card balances. Atlanta was one of the top areas to suffer from the unemployment surge and the devastating housing market collapse.

Equifax's report does offer citizens a little bit of hope as it reports that total consumer debt declined slightly from the terrifying peak back in October of 2008. A grand total of 54 million households owe creditors a sum of more than $800 billion in debt from unpaid credit card bills.

CreditCards.com offers you these tips to help you with your credit card debt in the meantime:

-Avoid debt collection. Try to negotiate with the original creditor and work out a payment with them before letting them sell the account to a collection agency or another third party.

-Don't make it too easy. Consumers should avoid giving collectors their bank account number or routing numbers. Payments should be made with money orders or some other third-party payment service. Be sure to keep proof of payment but avoid paying with a personal check. Electronic withdrawals from bank accounts are a big no-no as well.

-Familiarize yourself with your rights. Read and understand the Fair Debt Collection Practices Act. This act details handling problems involving harassing and nuisance phone calls, threats and abusive language. These acts are illegal and should be reported to the Federal Trade Commission (FTC) and your state attorney general's office.

-Protect your bank accounts. As collectors can file suit against consumers for not paying debts, they can also freeze savings or checking accounts. Keep separate accounts for Social Security or disability payments received as these are exempt from use for court-ordered payments. "I would urge people not to co-mingle other funds into the bank account to which the Social Security and disability payments are going. That would help a lot of people," says Rozanne Andersen, executive vice president of ACA International, the largest credit and debt collection industry trade group.