Payday loans are supposed to be a last-resort method for covering sudden, unexpected expenses. 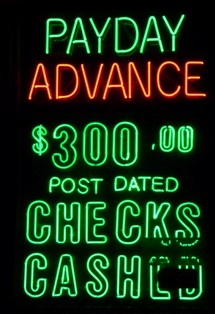 But as NBC News reports, a growing number of people are relying on these expensive short-term loans for routine costs like house payments, rent, groceries, and utility bills.

Recent data shows that 12 million people used payday loans in 2010, and it's believed that the number has only risen since then. The most common users of cash advance loans are parents of children, divorced people, and those struggling financially.

Not surprisingly, the debt adds up quickly.

Whereas a typical credit card requires the debtor to pay off just a portion of the balance each month, payday loan providers require full repayment - plus interest - in an average of 2 weeks.

When the money isn't available to pay back the loan, borrowers are forced to roll the original amount over into a new loan - with the addition of fees - or seek a short-term loan from another lender. Often times, the debt continues to snowball until it becomes absolutely unmanageable.

According to the Center for Responsible Lending, the typical payday loan borrower ends up in debt for six months at a time at an annual interest rate of 400 percent. In fact, the amount paid in interest frequently ends up exceeding the original loan amount.

NBC News reports that the average payday loan user borrows $375 a year but spends $520 in interest.

Some states, such as Georgia, have taken action to ban the predatory short-term loans. Unfortunately, many consumers simply go online to borrow money from payday lenders.

For some, payday loan debt can be even more troublesome than credit card debt. But like credit cards, payday loans are considered a form of unsecured debt. The good news is that these debts can often be discharged with a Chapter 7 bankruptcy filing.

If payday loans are sucking the pay right out of your pockets, filing for bankruptcy may provide relief.

Not only can bankruptcy discharge the loans, but it can stop harassment from lenders, reduce the credit card debt that may have led you to rely on cash advance loans in the first place, and, depending on the type of bankruptcy you choose, even stop foreclosure.

If payday loans are holding you and your family hostage, the right bankruptcy plan can offer a fresh financial start.

Learn what bankruptcy can do for your financial situation by calling the DebtStoppers Bankruptcy Law Firm at 800-440-7235. Contact us today for your free one-on-one debt analysis with a professional bankruptcy attorney.

Despite Recent Drop, Foreclosures Expected to Rise Again Before the Market Improves: August 10, 2012

Many Use Payday Loans to Cover Food, Rent, by Allison Linn, NBC News

Payday Lending: How a Short-Term Loan Becomes Long-Term Debt, by the Center for Responsible Lending