Even though the average wealth of U.S. consumers is on the rise, younger generations of Americans are actually becoming less wealthy. 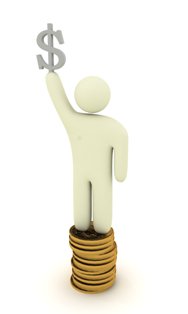 How is that possible? While incomes are finally starting to pick up, workers are saving less - particularly younger workers.

According to the New York Times, a recent study found that people under 40 have less wealth than their parents did at the same age.

In the past, disciplined consumers could save money left over after they'd paid rent, food and living expenses. Over time, their growing cash cushion would compound, creating even more wealth. The earlier a saver begins socking away money, the more wealth is accrued.

But these days, money that should be going to nest eggs is instead going toward growing credit card debt and overwhelming student loan payments. In fact, data by the Pew Research Center shows that 40 percent of young consumers had outstanding student debt in 2010 - up from 34 percent just three years earlier.

To make matters worse, some young adults poured all of their savings into purchasing homes at the height of the housing bubble. As home values fell, borrowers lost the equity paid into their properties - and many are now facing foreclosure. Still others have yet to buy a home and, without much money to their name, are unlikely to qualify for an affordable mortgage.

Yet another drawback to getting a late start on saving: It's too easy for any unexpected expense - from car repairs to temporary job loss - to obliterate extra cash and sink you deeper into credit card debt.

It seems that today's consumers are at an impasse: Young people need to save money to eliminate debt, but until they deal with debt, how can they start saving?

When you're at a financial standstill, waiting for things to get better usually just results in allowing them to get worse. The sooner you take action, the sooner you can find the financial stability to actually start saving.

For many people with overwhelming debt, bankruptcy can provide the financial relief necessary to turn over a new leaf.

With the right bankruptcy plan, it's possible to reduce or eliminate your debt burden, which in turn will free up more money from each paycheck. If you qualify for Chapter 13 bankruptcy, you'll also enjoy protection against foreclosure.

Don't let the opportunity for a financially-secure future pass you by. The sooner you tackle debt, the sooner you can start putting your money to work for you. Bankruptcy can give you the running start you need to make it happen.

To learn more about bankruptcy, consider speaking with one of our expert bankruptcy lawyers. Call DebtStoppers today at 800-440-7235 to schedule your complimentary one-on-one debt analysis with a professional bankruptcy attorney.

Published March 26, 2013 | Posted in Bankruptcy, Getting Out of Debt, Personal Finance, Saving | Leave a comment