The Marietta Daily Journal reports that a recent study found that Georgia residents are putting more money into their personal savings and spending less on credit cards.

This is great news for Georgia consumers saddled with increasing personal debt. Atlanta Bankruptcy Lawyers believe that perhaps the many people who have recently filed for bankruptcy in Georgia have been able to become free from creditors and have begun saving for the future. If you or a loved one is struggling with debt and unable to put away money for the future, it's possible that filing for bankruptcy in Atlanta could be the best way to get back on track financially. 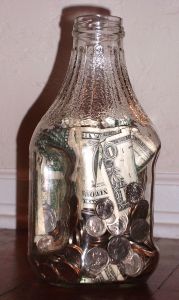 According to statistics from the U.S. Bankruptcy Court for the Northern District of Georgia, nearly 22,000 people filed bankruptcy in the Atlanta area through May. The area is on pace to come close to the nearly 55,000 filings from 2010.

According to a study by the Georgia Credit Union Affiliates, balances of credit union members' savings accounts grew by more than 4.6 percent and money market accounts grew by 4.34 percent during the first quarter of 2011.

Being able to save for the future and not having to deal with nagging creditors is refreshing. And one surefire way to accomplish that is by consulting with Atlanta Bankruptcy Lawyers to see if filing for Chapter 7 or Chapter 13 bankruptcy is the best strategy for you and your family.

What bankruptcy laws allow for is for consumers to take charge of the debt that has amassed and figure out a plan to stay out of debt in the future. Filing for bankruptcy immediately stops the foreclosure process and halts creditors and collection agencies from contacting you. Chapter 7 bankruptcy allows consumers to sell off assets to pay creditors, while Chapter 13 allows people to keep large assets while setting up a payment plan over a 3- to 5-year period. And in many states, there are exemptions in bankruptcy, which allow you to keep vehicles, personal possessions and family heirlooms.

Many people are in a tough spot right now because of the failing economy and the high jobless rate, which currently sits at 9.9 percent in Georgia, nearly 1 percent higher than the national average, according to the Georgia Department of Labor. And continuing to struggle financially may not be in the best interests of consumers in the Atlanta area. Job loss, predatory credit card companies or an unexpected medical bill are the leading reasons people file for bankruptcy. With millions of people nationwide taking advantage of bankruptcy protection, it's time to act.

It may be time to take a hard look at your finances, your debts and what can be done to live a better life financially. If you aren't sure where to turn or what to do, use our free personal debt analysis so our debt consultants can help you determine if bankruptcy would help you get free from debt so you, too, can start saving more and spending less.