Lenders are beginning to market personal loans as a way for cash-strapped Atlanta consumers to consolidate debt, according to The Wall Street Journal. 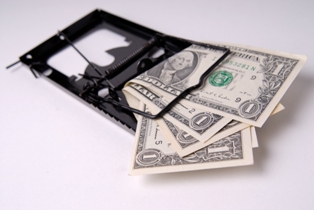 While small loans all but died off during the recession, banks now see them as a way to make up for a reduction in home equity loans and other types of lending.

As a result, major lenders are ramping up their marketing efforts. Banks mailed 425 million personal loan offers to customers in 2011 - that's up from 290 million in 2010.

A personal loan can be used to finance a home remodel, pay for a wedding, or pay off debt over a fixed period of time. While personal loans don't come cheap - they're usually more expensive than secured loans like mortgages or car loans - they're almost always more affordable than credit cards.

A typical five-year personal loan for a borrower with good credit may have an interest rate between 8.5 percent and 14.5 percent, while a typical credit card could have a rate of 20 percent.

Some banks are offering even better deals. For instance, American Eagle Federal Credit Union will lower the interest rate on personal loans to 6.25 percent if consumers agree to have payments automatically deducted.

But Atlanta bankruptcy lawyers say there may be a catch.

Personal loans work best for borrowers with a small amount of existing debt. However, the loans can actually aggravate financial troubles for those attempting to consolidate large credit card debts.

Consumers who have routinely used credit cards to stay afloat during tough times may be tempted to pile on new charges after consolidating debt with a loan, further complicating an already complex situation.

Falling salaries and rising costs have led many Americans to rely on credit cards almost as supplemental income sources. Unless spending habits are changed, consumers are likely to continue using credit after taking out a personal loan.

The problem with consolidating debt when you are still using existing lines of credit is that debt is only spread around, not eliminated. Filing for bankruptcy in Atlanta can provide a better solution.

Bankruptcy was developed specifically to assist consumers in getting rid of debt. Depending on the type of Atlanta bankruptcy you file for, you will either be provided with an affordable payment plan or the ability to discharge debts in entirety.

If interest rates, charges, and fees are adding to your debt, the best solution is to start with a clean slate, not another loan or line of credit. Bankruptcy may be able to provide the fresh start you need.

To speak with an Atlanta bankruptcy attorney today call the DebtStoppers Bankruptcy Law Firm at 800-440-7235 today for a free personal debt analysis.